Once a maritime power to rival Genoa and Venice, Pisa now draws its fame from an architectural project gone terribly wrong, but the world-famous Leaning Tower is just one of many noteworthy sights in this compelling city. Education has fuelled the local economy since the 1400s, and students from across Italy compete for places in its elite university. This endows the centre of town with a vibrant cafe and bar scene, balancing an enviable portfolio of well-maintained Romanesque buildings, Gothic churches and Renaissance piazzas with a lively street life dominated by locals rather than tourists.

While the bell tower of the cathedral, known as "the leaning Tower of Pisa", is the most famous image of the city, it is one of many works of art and architecture in the city's Piazza del Duomo, also known, since the 20th century, as Piazza dei Miracoli (Square of Miracles), to the north of the old town center. The Piazza del Duomo also houses the Duomo (the Cathedral), the Baptistry and the Campo Santo (the monumental cemetery). The medieval complex includes the above-mentioned four sacred buildings, the hospital and few palaces. All complex is kept by the Opera (fabrica ecclesiae) della Primaziale Pisana, an old non profit foundation that operates since the building of the Cathedral (1063) to the maintenance of the sacred buildings. The area is framed by medieval walls kept by municipality administration.

In Lucca, our guide will lead you through the streets of the town, letting you get to know the all the beautiful aspects of this town. Lucca endears itself to everyone who visits. Hidden behind imposing Renaissance walls, its cobbled streets, handsome piazzas and shady promenades make it a perfect destination to explore by foot. Lucca is famous for its intact Renaissance-era city walls. The town includes a number of public squares, most notably the Piazza dell'Anfiteatro, site of ancient Roman amphitheater; but also Piazzale Verdi; Piazza Napoleone'; and Piazza San Michele. 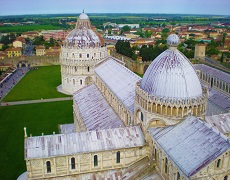 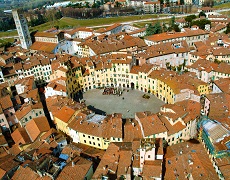 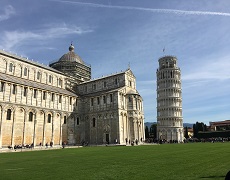 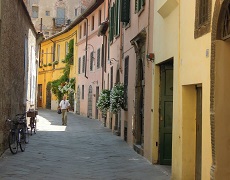 Siena  is one of the nation's most visited tourist attractions, a place you must visit. Siena is famous for its cuisine, art, museums, medieval cityscape and the Palio, a horse race held twice a year.

The Siena Cathedral (Duomo), begun in the 12th century, is a masterpiece of Italian Romanesque-Gothic architecture. Its main façade was completed in 1380. The original plan called for an ambitiously massive basilica, the largest then in the world, with, as was customary, an east-west nave. However, the scarcity of funds, in part due to war and plague, truncated the project, and the Sienese created a subdued version from the original plan's north-south transept. The east wall of the abandoned original folly of a nave still stands; through an internal staircase, visitors can climb for a grand view of the city.

The Piazza del Campo, the shell-shaped town square, unfurls before the Palazzo Pubblico with its tall Torre del Mangia which is one of Siena’s main symbol with its 102 meters height.  Piazza del Campo is part of the site for the Palio, a medieval  horse race. The square, itself is a great work of architecture, houses yet another important art museum, Ambrogio Lorenzetti's frescoes depicting the Allegory and Effects of Good and Bad Government and also some of the finest frescoes of Simone Martini and Pietro Lorenzetti.

The Palazzo Salimbeni, located in a piazza of the same name, was the original headquarters and remains in possession of the Monte dei Paschi di Siena, one of the oldest banks in continuous existence in Europe.

We will continue our journey to San Gimignano. This town has kept its medieval form and atmosphere, walking between these magnificent buildings you would feel like a time traveller.

Known as the Town of Fine Towers, San Gimignano is famous for its medieval architecture, unique in the preservation of about a dozen of its tower houses, which with its hilltop setting and encircling walls form "an unforgettable skyline". While in other cities, such as Florence, most or all of their towers have been brought down due to wars, catastrophes, or urban renewal, San Gimignano has managed to conserve fourteen towers of varying heights, for which it is known internationally. Within the walls, the well-preserved buildings include notable examples of both Romanesque and Gothic architecture, with outstanding examples of secular buildings as well as churches. The Palazzo Comunale, the Collegiate Church and Church of Sant' Agostino contain frescos, including cycles dating from the 14th and 15th centuries.

After we finished admiring this truly atmospheric town, why not visit on of the world’s best ice cream parlour and patisserie.

Volterra is a walled mountaintop town in the Tuscany region of Italy of which its history dates to before the 7th century BC and has substantial structures from the Etruscan, Roman, and Medieval periods.

Volterra's well-preserved medieval ramparts give the windswept town a proud, forbidding air that author Stephenie Meyer deemed ideal for the discriminating tastes of the planet's principal vampire coven in her wildly popular Twilight series. Fortunately, the reality is considerably more welcoming, as a wander through the winding cobbled streets attests. Just as other Etruscan town Volterra was built on a hill too, from the streets and squares you can catch a breath taking view to the surrounding vineyards and orchards.

Pinacoteca (Art Gallery) in Palazzo Minucci-Solaini. Founded in 1905, the gallery consists mostly of works by Tuscan artists from 14th to 17th centuries.

Volterra Cathedral, it was enlarged in the 13th century after an earthquake. It houses a ciborium and some angels by Mino da Fiesole, a notable wood Deposition (1228), a masterwork of Romanesque sculpture and the Sacrament Chapel, with paintings by Santi di Tito, Giovanni Balducci and Agostino Veracini. In the center of the vault are fragments of an Eternal Father by Niccolò Circignan 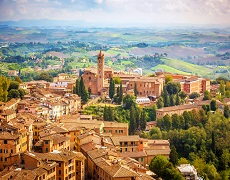 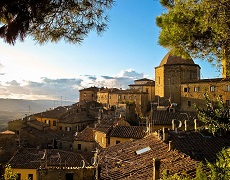 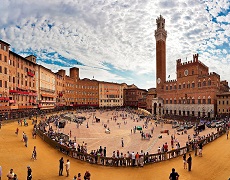 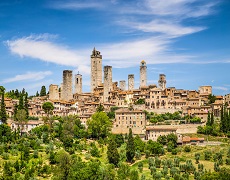 While we are on holiday in Tuscany, it would be a sin not to visit on of its famous vineyard and olive oil orchard. Here in Bolgheri we can take a closer look on the process of Italian wine making and cultivating technics, olive oil pressing and the ever mezmerizing olive orchard. After a guided walk through the grape covered slopes and the wine celars, finaly we will sample some delicious Tuscan wine and have a traditional lunch.

The menu will contain a charcuterie board, a cheese board, and a Tuscan main dish (wich can be a traditional Tuscan hearty soup or a tortelli maremmani al ragu di chianina, tagliatelle al ragu).

The food will be accompanied by a glass of red and white wine from the celar.

After lunch there is a possibility to buy some of this magnificent wine and olive oil to take home for family and friends, now we can spend a couple of hours in the medeival Bolgheri town centre. 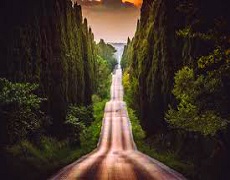 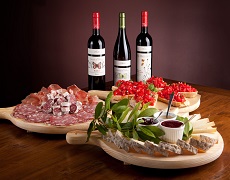 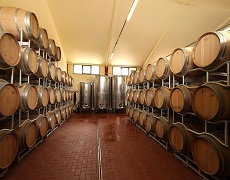 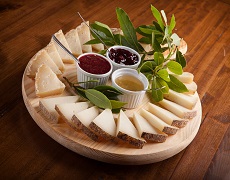 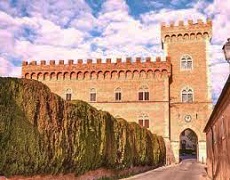 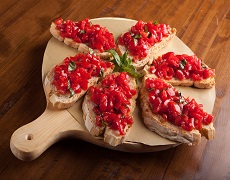 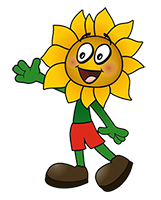